Alice came to the fork in the road.
“Which road do I take?” she asked.
“Where do you want to go?” responded the Cheshire cat.
“I don’t know,” Alice answered.“
Then,” said the cat, “it doesn’t matter.

Strategy is a high level plan to achieve one or more goals under conditions of uncertainty. 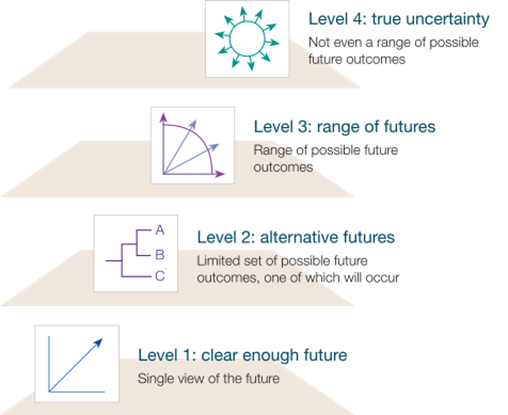 In predictable business environments, most companies are adapters. Analysis is designed to predict an industry’s future landscape, and strategy involves making positioning choices about where and how to compete. When the underlying analysis is sound, such strategies by definition consist of a series of no-regrets moves.  Adapter strategies in level one situations are not necessarily incremental or boring.  The best level one adapters create value through innovations in their products or services or through improvements in their business systems, without fundamentally changing the industry.

It is also possible to be a shaper in level one situations, but that is risky and rare, since level one shapers, hoping fundamentally to alter long-standing industry structures and conduct, increase the amount of residual uncertainty—for themselves and their competitors—in otherwise predictable markets.

If shapers in level one try to raise uncertainty, in levels two through four they try to lower it and create order out of chaos. In level two, a shaping strategy is designed to increase the probability that a favored industry scenario will unfold.  The best companies supplement their shaping bets with options that allow them to change course quickly if necessary. Because trigger variables are often fairly simple to monitor in level two, it can be easy to adapt or reserve the right to play.

Shaping takes a different form in level three. If at level two shapers are trying to promote a discrete outcome, at level three they are simply trying to move the market in a general direction because they can identify only a range of possible outcomes.  Reserving the right to play is a common posture in level three. 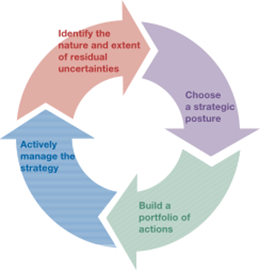 Paradoxically, though level four situations involve the greatest uncertainty, they may offer higher returns and lower risks for companies seeking to shape the market than situations in levels two or three. Recall that level four situations are transitional by nature, often emerging after major technological, macroeconomic, or legislative shocks. Since no player necessarily knows the best strategy in these environments, the shaper’s role is to provide a vision of an industry structure and standards that will coordinate the strategies of other players and drive the market toward a more stable and favorable outcome.

Reserving the right to play is common but potentially dangerous in level four situations. A few general rules apply. First, look for a high degree of leverage.  Second, don’t get locked into one position through neglect. Options should be rigorously re-evaluated whenever important uncertainties are clarified and at least every six months. Remember, level four situations are transitional, and most will quickly move toward levels three and two. The difficulty of managing options in level four situations often drives players toward adapter postures. As in level three, such a posture in level four is frequently implemented by making investments in organizational capabilities.

You know how it is when you go to be the subject of a psychology experiment, and nobody else shows up, and you think maybe that’s part of the experiment? I’m like that all the time.