The idea is that rather than anchoring to a single point at the centre of the traveller track, you anchor to two points, one off to either side of centre. This means that there is always one rope with a component of its tension that stops the car from moving, even when centered. This is not the case with a single anchor point. To look at it another way, it’s fairly easy to push even a very tight rope sideways, but much harder to move it in the direction that it’s pulling.

There are several options:

-1- Make a small hole in the mantle of your mainsheet line and pull the core out through this opening. You now have two tales.   Then pass the cover (mantle) though the core and then the core through the cover to prevent any slipping of the cover and core. Finish it off with a nice whip over the intersections and then whip the ends to keep it looking neat.

-2- Pull the mantle back and cut off the exposed core.  Pull a 3mm rope back in the mantle by its midsection. Stitch the line in place once the mantle is fully extended again. (this is the setup I have and it is still holding well)

-3- Variation on -2- : extend mantle back after cutting away core. Open up the mantle next to were the core begins again. Run a small (3 mm) line through this opening and through the hollow mantle towards the end of the mainsheet. Stitch the line into place as well as the core end. This approach is often simpler then -2- and rather easy to do at home. The mantle must be strong however.

-5- Take swift cord 6 mm (hollow) and run a 3 mm line inside it. Run it up the sheet meaning from split to where you will be holding the traveller sheet (or the cleat will). Just start the insert a little up from the tale end. Stitch both ends to each other.

-6- Quick and dirty. Make a small bowline loop in the middle of a 3 mm line. Tie both ends of to the beam in such a way that the top of the bowline loop just won’t touch the place where the traveller sheet exists the car. Now rig the traveller sheet through the car and through the bow line loop and terminate it with a figure 8 knot. The loop must be small enough to only allow passing of the traveller line. This works actually rather well, you only miss about 10-15 mm in sheeting relative to the perfect centre of the beam. 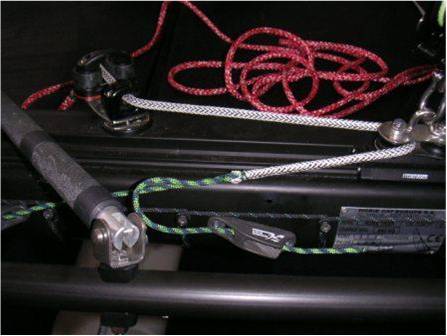