Information may be incomplete or inaccurate.  Use at own risk.  I accept no responsibility or liability in any case. 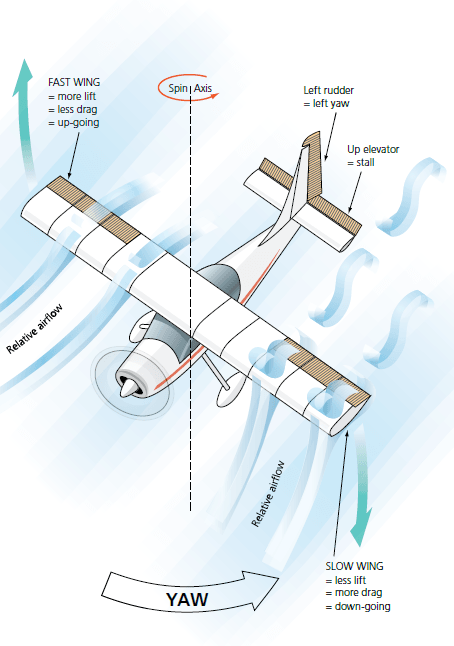 Why does a stall occur?

Stalls depend only on angle of attack, not airspeed. However, the slower an airplane goes, the more angle of attack it needs to produce lift equal to the weight. As the speed decreases further, at some point this angle will exceed the critical angle of attack.

Are both wings stalled in a spin?

At the point of stall, before yaw toward the stalled wing occurs, the lower wing may stall first and deepen its stalled state due to its higher drag and loss of lift. The upward going wing may reduce its angle of attack on initial rotation, even unstalling itself. Spins are characterised by exceeding the critical angle of attack, developed rotation about the vertical axis, with airspeed stabilised in the developed spin but resulting in an uncontrolled descent.

What is the difference between a spin and a spiral?

A spin is a stalled, constant-airspeed condition where at least one wing is stalled and producing substantially reduced lift. Since the lower wing is in a deeper stall than the high wing, the airplane rotates around its vertical, lateral and longitudinal axis making it look and feel similar to a spiral dive. In a spiral dive the wing is not stalled. The autorotation is about the lateral and longitudinal axis only. A spiral dive is not a type of spin, because neither wing is stalled.

How do you recover from a stall?

In all situations, it is necessary to recover from a stall before applying any other recovery actions. To recover from the stall, the angle of attack must be reduced below the stalling angle. Nose-down pitch control must be applied and maintained until the wings are unstalled.

How do you recover from a spin?

The POH is the primary reference for recovery from a spin for a specific aircraft, but the following can be used as a general procedure:

1. P – Power. Retard the throttle to idle. In most aircraft, power hampers recovery;

Before flying any aircraft, in which spins are to be conducted, be familiar with the characteristics and standard operating procedures, including spin recovery techniques, specified in the POH. The first step in recovering from an upright spin is to close the throttle completely to eliminate power and minimise the loss of altitude. The next step is to neutralise the ailerons, determine the direction of the turn and apply full opposite rudder. When the rotation slows, briskly move the elevator control forward to the neutral position. Some aircraft require merely a relaxation of back pressure; others re-quire full forward elevator control pressure. Forward movement of the elevator control will decrease the AoA. Once the stall is broken, the spinning will stop. Neutralise the rudder when the spinning stops to avoid entering a spin in the opposite direction. When the rudder is neutralised, gradually apply enough back-elevator pressure to return to level flight. Too much or abrupt back pressure and/or application of rudder and ailerons during the recovery can result in a secondary stall and possibly another spin. The engine will sometimes stop developing power due to centrifugal force acting on the fuel in the tanks, causing fuel interruption. It is, therefore, recommended when practicing spin recovery, to assume power will not available. As a rough estimate, an altitude loss of approximately 500ft per each three-second turn can be expected. Greater losses can be expected at higher density altitudes.

The spiral mode is an autorotation mode similar to a spin. The centre of rotation is close to the centreline but the aircraft is not stalled. Many aircraft and gliders will not spin at forward CG locations but will spiral. Many aircraft will enter a spin, but the spin will become more vertical and degenerate into a spiral. It is important to note that when the spin transitions into the spiral the airspeed will increase as the nose goes down to near vertical. The aerodynamic stress forces on the aircraft build very rapidly and recovery must be affected immediately before the structural limits of the air-craft are exceeded. Release the back pressure on the stick, neutralise the rudder, ensure the wings are level and gently recover from the dive. As in the spin recovery, avoid abrupt or excessive elevator inputs which could lead to a secondary stall or structural overload.

“Dragon Drop?”, he asked. “I don’t want to play Dungeons and Dragons. I just want to copy some freakin’ files!”