“The neurological condition of echopraxia is to autonomy (read: free will) as blindsight is to consciousness.”
― Peter Watts, Echopraxia

“I’ve told you before, Daniel: roach isn’t an insult. We’re the ones still standing after the mammals build their nukes, we’re the ones with the stripped-down OS’s so damned simple they work under almost any circumstances. We’re the goddamned Kalashnikovs of thinking meat.” 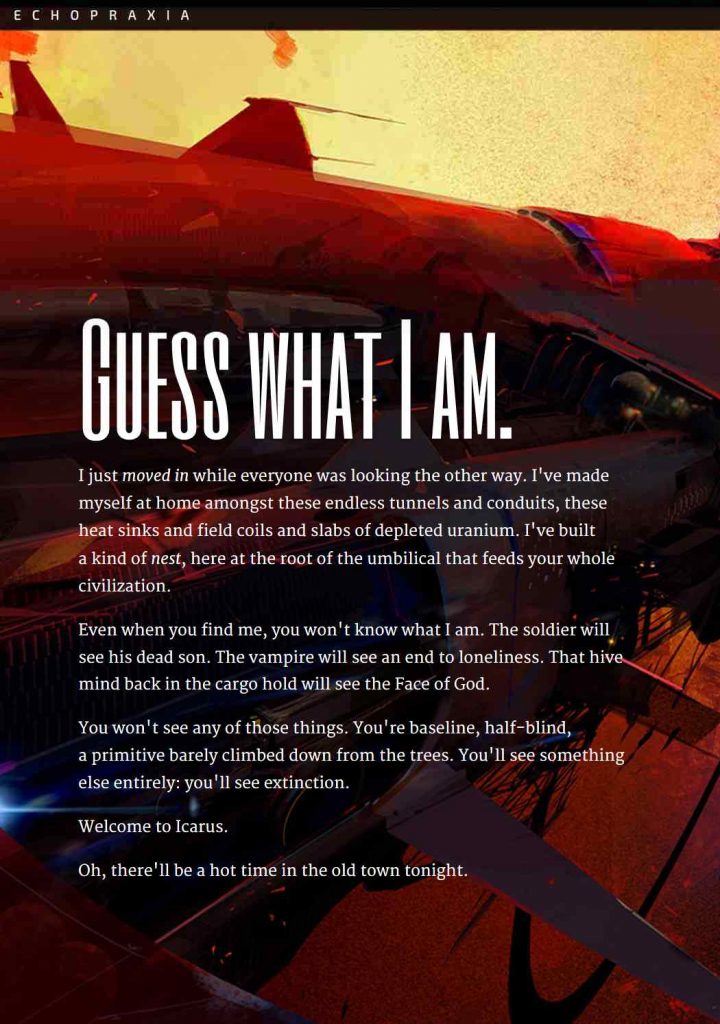 Back on the pad a newborn vortex chafed at its restraints, smaller than its predecessor but angrier, somehow. Yellow icons blossomed across VEC/PRIME like rampant brushfires. Overhead, something was eating Gemini feetfirst.

Another window opened on the wall, a hodgepodge of emerald alphanumerics. Slippers blinked and frowned, as though the apparition was somehow unexpected. Greek equations, Cyrillic footnotes, even a smattering of English flowed across the new display.

Not telemetry. Not incoming. According to the status bar, this was an outgoing transmission; the Bicamerals were signaling someone. It all flickered by too fast for Brüks to have made much sense of it even if he had spoken Russian, but occasional fragments of English stuck in his eye. Theseus was one. Icarus another. Something about angels and asteroids flashed center stage for a moment and evaporated.

Out in the desert, the zombies stopped flickering.

“Huh,” Slippers said, and raised a finger to his right temple. For the first time Brüks noticed an old-fashioned earbud there, an audio antique from the days before cortical inlays and bone conduction. Slippers inclined his head, listening; up on the wall a flurry of red and green turned the ongoing exchange into a Christmas celebration.

Over on VEC/PRIME, orange and red icons downshifted to yellow. The chained vortex stopped thrashing on its pad and whirled smoothly at attention. Halfway to the horizon, the last vestiges of its older sibling dissipated in a luminous mist of settling dust.

The desert rested quietly beneath an invisible thing in the sky.

Just a few minutes ago, Dan Brüks had watched himself die out there. Or maybe escape in the nick of time. Something like him, anyway. Right up until that last moment when the maelstrom had chewed it up and spat it out. And right at that moment, the zombies had come—unglued …

“But why me? Why”—in the sky, invisible airships—“why anything? Why not just cloak, like that thing up there?”

“Can’t cloak thermal emissions without overheating,” Slippers told him. “Not for long at least, not if you’re an endotherm. Best you can do is make yourself look like something else. Dynamic mimicry.”

Brüks snorted, shook his head. “You’re not even Bicameral, are you?”

Slippers smiled faintly. “You thought I was?”

Dude, thought I, do you have the first fucking clue how silverbacks react to eye contact?

We’re talking to a mirror.”
“You want to make any progress at all—” Moore said.
“—you’ve got to break it.”

Failure to comply with a lawful order.

William Gibson was right. The street finds its own uses for things.

Of course, so does the state.

“The clothes have no emperor.”

“A neuron didn’t know whether it fired in response to a scent or a symphony. Brain cells weren’t intelligent; only brains were. And brain cells weren’t even the lower limit. The origins of thought were buried so deep they predated multicellular life itself: neurotransmitters in choanoflagellates, potassium ion gates in Monosiga. I am a colony of microbes talking to itself, Brüks reflected.”

It was such an uphill struggle. Consciousness had never had the upper hand; I had never been more than the scratchpad, a momentary snapshot of a remembered present. Maybe Brüks hadn’t heard those voices before but they’d always been there, hidden away, doing the heavy lifting and sending status reports upstairs to a silly little man who took all the credit. A deluded homunculus, trying to make sense of minions so much smarter than it was.

It had only ever been a matter of time before they decided they didn’t need him.

An End to Loneliness

THE NEW TESTAMENT’S CLEAR WITNESS IS TO THE RESURRECTION OF THE BODY, NOT THE MIGRATION OF THE SOUL.

THERE’S NOT MUCH to work with. Barely a melanoma’s worth. Enough to rewire the circuitry of the midbrain, certainly; but to deal with shattered bones? Enough to keep osteoblasts and striated muscles alive in the face of such massive damage, to keep the metabolic fires flickering? Enough to keep decomposition at bay?

Barely. Perhaps. One piece at a time.

The body shouts, wordless alarm-barks, when the scavengers come calling. Judicious twitches scare away most of the birds. Even so, something pecks out an eye before the body’s whole enough to crawl for shelter; and there will be necrosis at the extremities. The system triages itself, focuses on feet and legs and the architecture of locomotion. Hands can be replaced, if need be. Later.

And something else: a tiny shard of God, reprogrammed and wrapped in a crunchy encephalitis jacket. A patch, targeted to a specific part of the vampire brain: Portia processors, homesick for the pattern-matching wetware of the fusiform gyrus.

There’s no longer any light behind these eyes. The parasitic, self-reflective homunculus has been expunged. The system still has access to stored memories, though, and if there was sufficient cause it could certainly replay the awestruck words of the late Rakshi Sengupta.

Can you imagine what those fuckers could do if they could actually stand to be in the same room together?

An end to loneliness. By now, the system that was Daniel Brüks seethes with it. His is the blood of the covenant; it will be shed for many.

It hauls its broken, stiff-legged chassis to its feet—only an observer for now, but soon, perhaps, an ambassador. The resurrection walks east, toward the new world.

Valerie’s legacy goes along for the ride.

If attacked by a mob of clowns go for the juggler.