This is where I keep my current MPCNC config in case I have to reflash it:

It is now time to plot the obligatory MPCNC crown test pattern with a pen holder and pen. 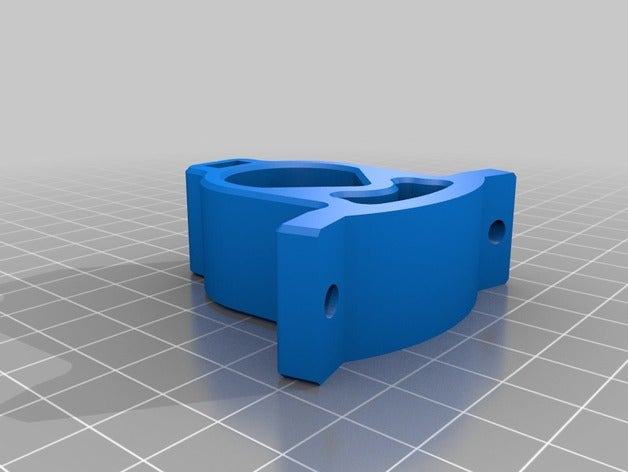 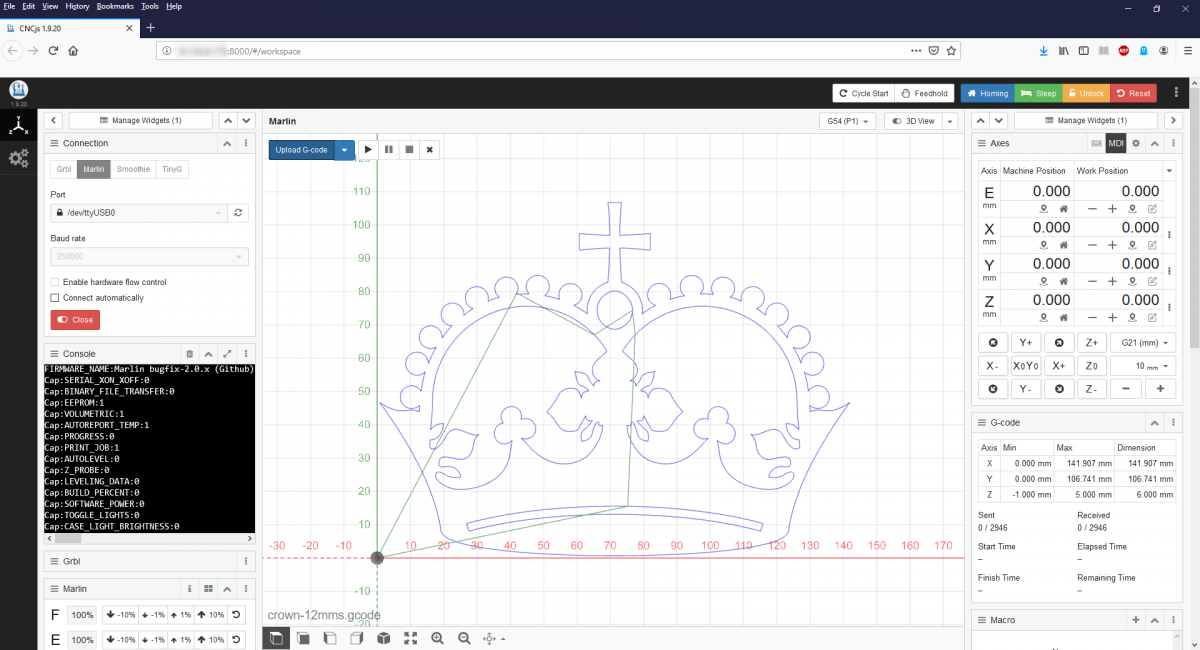 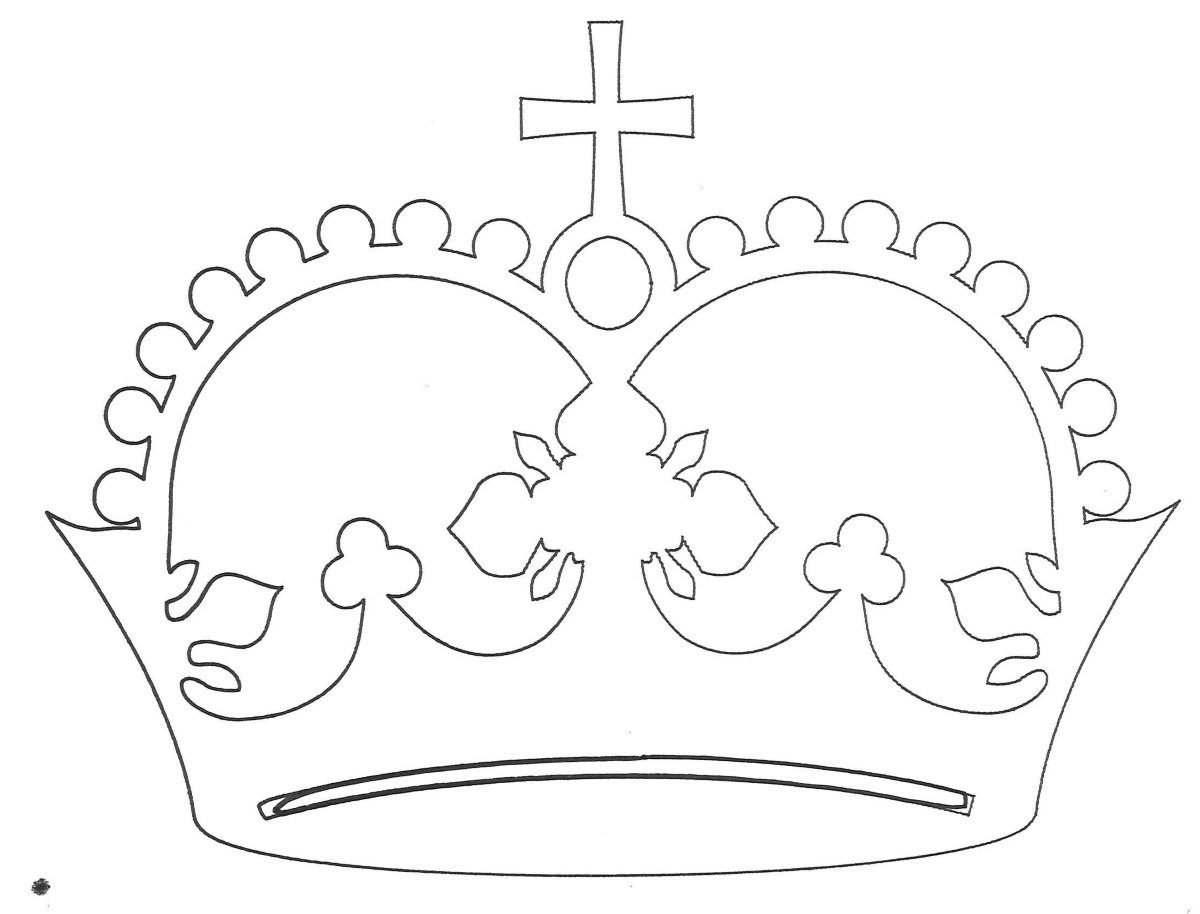 This is the actual result of the very first time the machine was used to plot a file.  I had to restart the operation as the pen tip was a fraction too close to the surface and started dragging.  The second attempt completed successfully.

When generating Gcode in Fusion360 select “Setup” and select ‘Use Personal Posts’ from the drop down list.

So as a first attempt I created a drill grid for a 920x920mm spoilboard consisting of a 9 x 9 points grid with 100mm spacing and a 60mm edge perimeter: 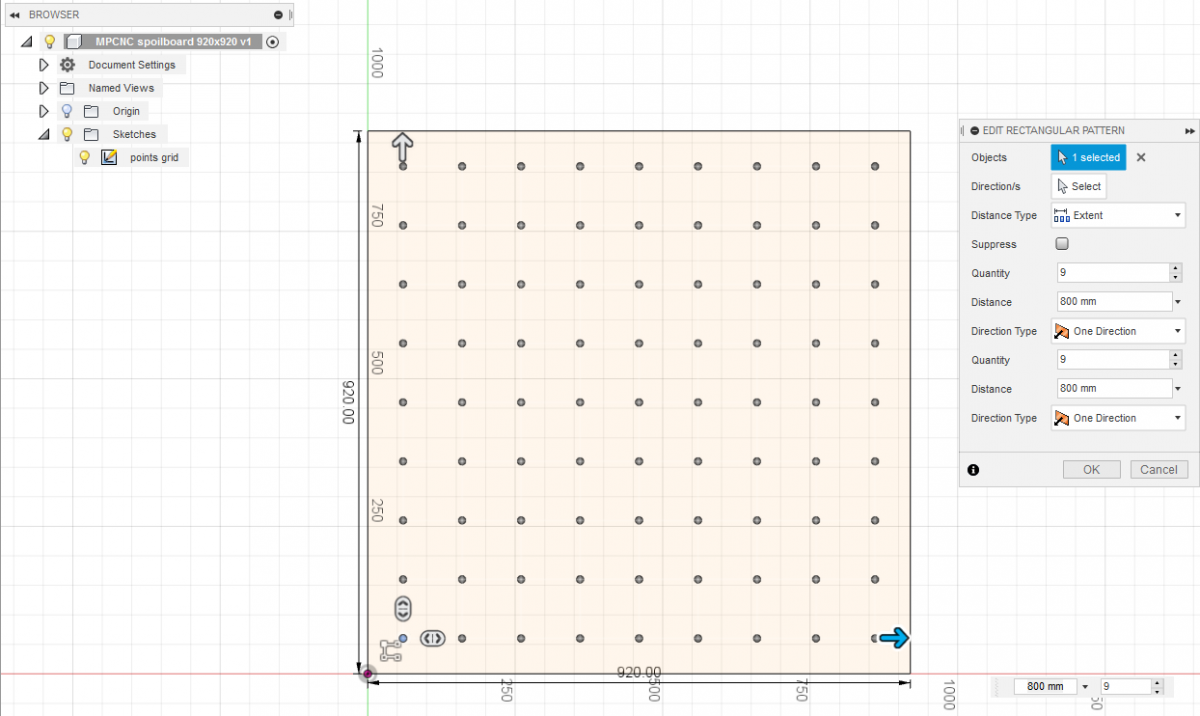 I then generated a center drilling toolpath and loaded the MPCNC Fusion360 Post processor to generate Gcode: 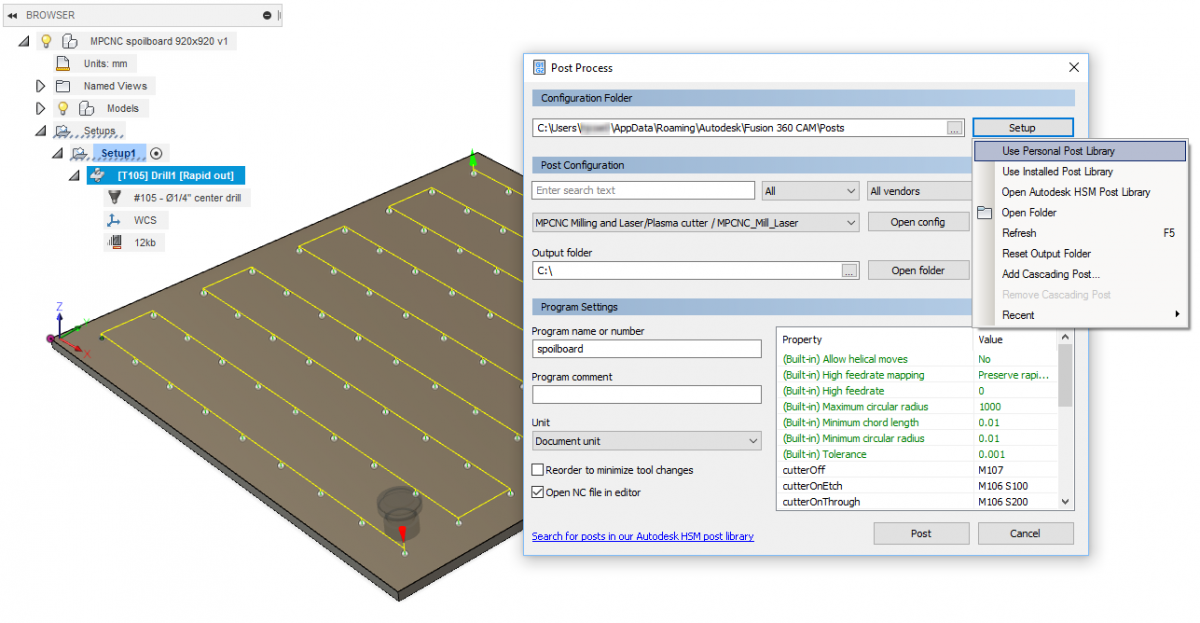 I had to leave some holes out as the machine could not reach.

When I ran the Gcode on the machine I realized my machine does not do absolute negative machine coordinates.  I have dual steppers enabled, but not dual endstops (X1min + X2min + Y1min + Y2min) in Config_adv.h.  I do however have Xmin and Ymin enabled in Config.h.  I do not have limit switches installed as of yet.  As soon as you have Xmin and Ymin enabled, the machine will force you to stay within the bed area.  This means absolute negative machine coordinates are not allowed; you cannot move beyond the lower left corner.  When I power up the machine with the spindle located in the center of the spoilboard, this effectively becomes X0 Y0 Z0 and I cannot move to the left or to the bottom from here as that is considered outside of the bed area.

This should enable me to use positive machine coordinate throughout and be able to run my Gcode using work (offset) coordinates from the center of the spoilboard, using both positive and negative move values.

A more detailed explanation can be found here:
https://github.com/synthetos/g2/wiki/Gcode-Coordinate-Offsets

CNC_Coordinate_Systems is enabled in my [Configuration_adv.h].  However, Marlin does not recognize G10 L20 P1 X0 Y0 Z0 commands unfortunately.

I have lodged a feature request with the great developer community of Marlin:
https://github.com/MarlinFirmware/Marlin/issues/14734

I did some more research and discovered Marlin treats G53 (machine coordinate system) and G54 (1st work offset coordinate system) the same.  You cannot set a new origin in G54 without it also affecting the origin of G53 and vice versa (!)

I have reported this as a bug on the Marlin github page issue tracker:
https://github.com/MarlinFirmware/Marlin/issues/14743

I discovered using G55 (2nd work offset coordinate system) works fine however.  I have implemented a bugfix that allows G54 to work as well.

So all I have to do is the following:

I tested this and it works properly.  Xmin and Ymin enstop positions also work correctly and are relative to the G53 machine coordinate system origin as they should.  Even if I am in G54 I cannot go past Xmin and Ymin, which is a nice safety feature.

The one disadvantage is that CNC.js Axes widget does not display work (offset) coordinates.  This is because Marlin only outputs a single set of coordinates at a time. 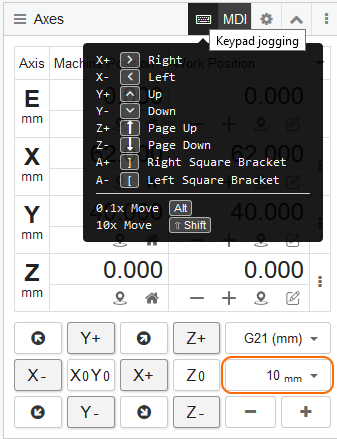 I noticed when the machine hits an endstops Marlin simply skips any gcode operations in the restricted area and simply continues when it returns to the work bed area.  This is undesirable; I would expect an emergency stop.

After all this I decided to simply disable software endstops and work in G53 unrestricted.  This will allow me to simply move the spindle by hand to the origin of choice and power up the logic board from there.

Nothing’s impossible for those who don’t have to do it.