A friend handed me this box of remote control goodies that were sitting on a shelf in need of some attention for me to have some fun with. 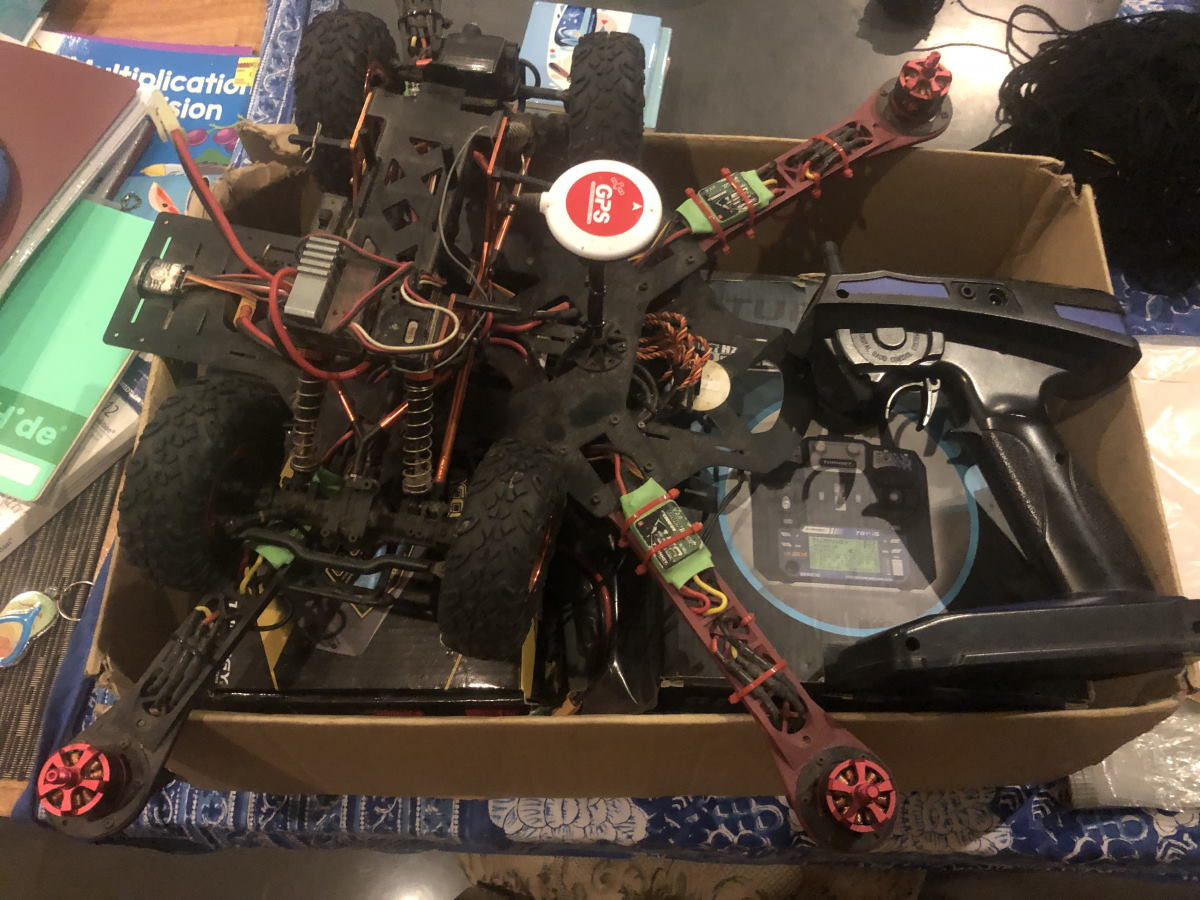 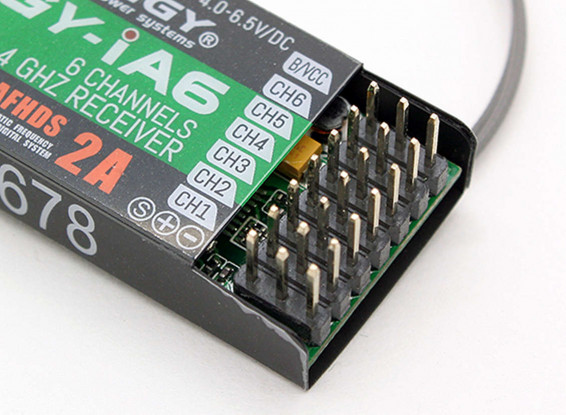 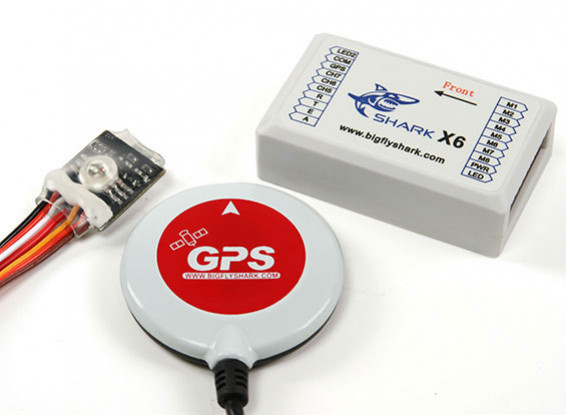 The Shark X6 is the same as the Shark X8.  The only difference is plastic housing versus metal housing and built-in SD Card reader.

With propellers removed, I was able to get the drone to run all four motors.  I had to enable PPM output on the receiver module (RX).  This is done by going into setup by holding the OK button on the transmitter (TX) for 2 seconds and changing the setting.  To arm the motors the Shark X6 FC wants you to move both sticks into a bottom corner position simultaneously (safety precaution): 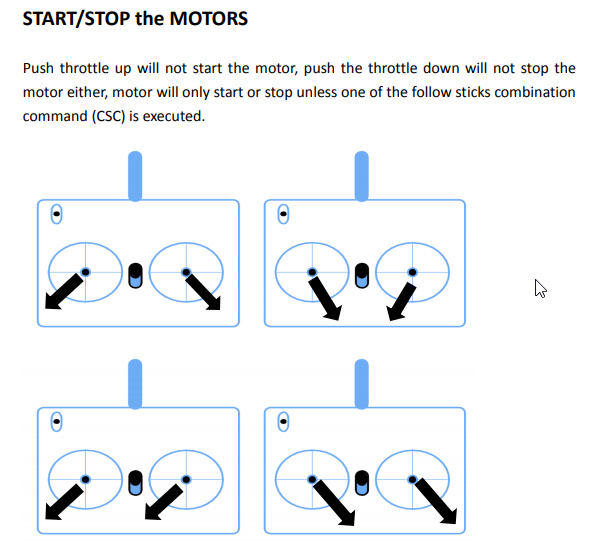 [!] Vesion v23 requires that you have the transmitter / receiver active prior to connecting the USB cable. Once I connected the transmitter / receiver and only then connected the USB cable, the status changed from “Waiting For Link” to “Get Parrameter OK”. I was also able to see the response of the accelerometers and gyros and perform an attitude calibration. 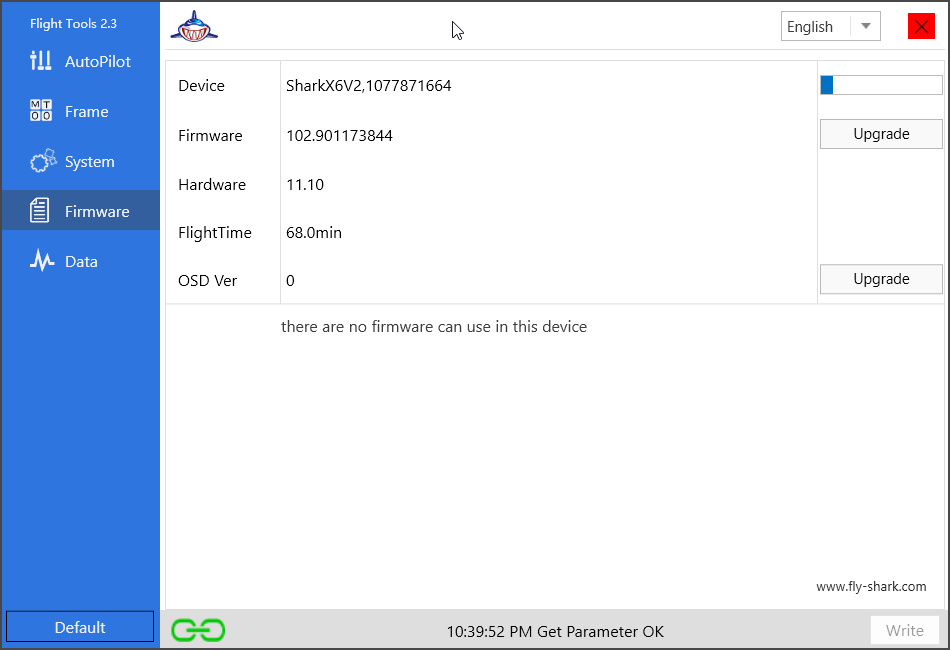 The transmitter is configured as Stick Mode 2: 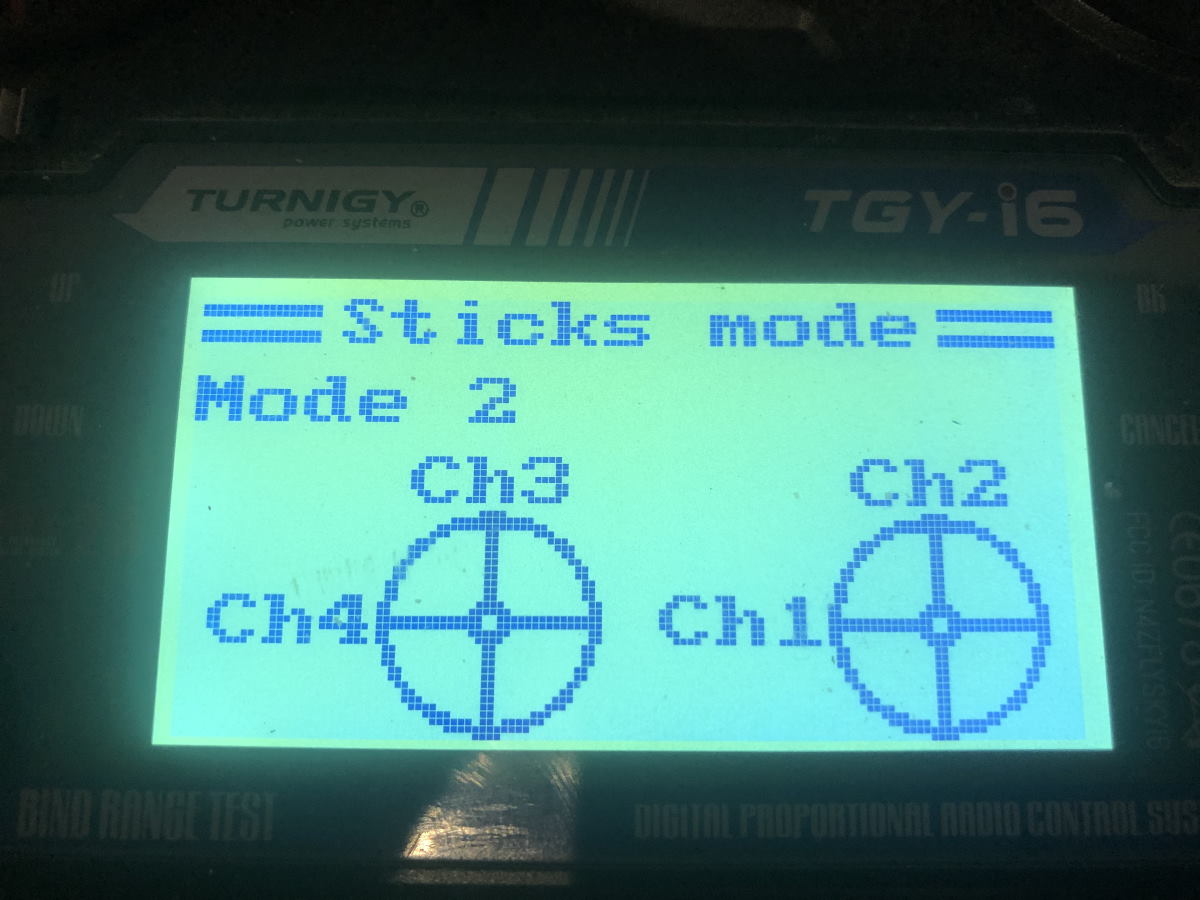 The left hand side stick on the transmitter does not spring back to the neutral center position and is typically used as throttle.  So stick mode 2 or mode 4 are suitable for this transmitter.  Stick mode 2 is most common.

Some channels e.g. elevator are typically inverted (‘pull stick towards you to climb’) for airplanes.   Drones do not need this.  Simply set all channels to normal. 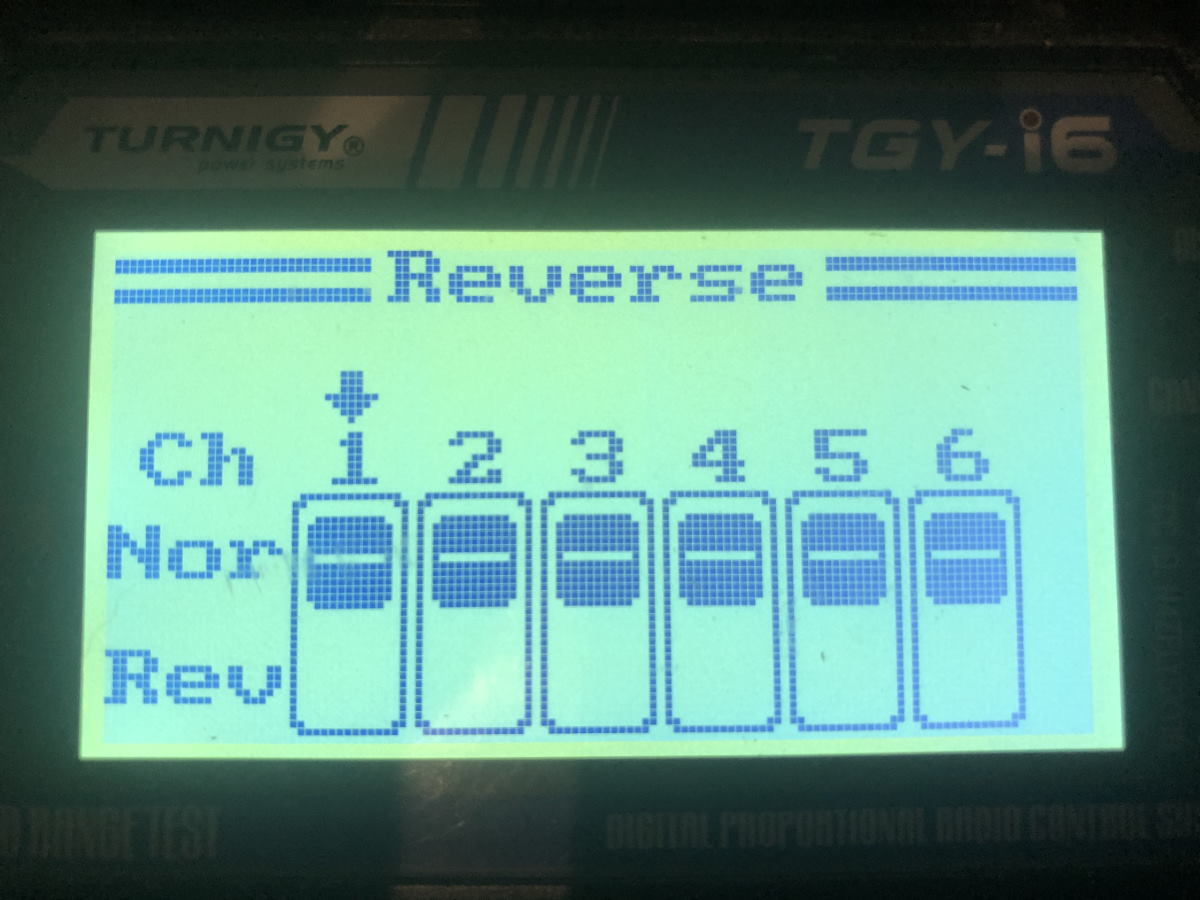 Make sure stick movement has full range of motion with proper center and is not trimmed in any way. 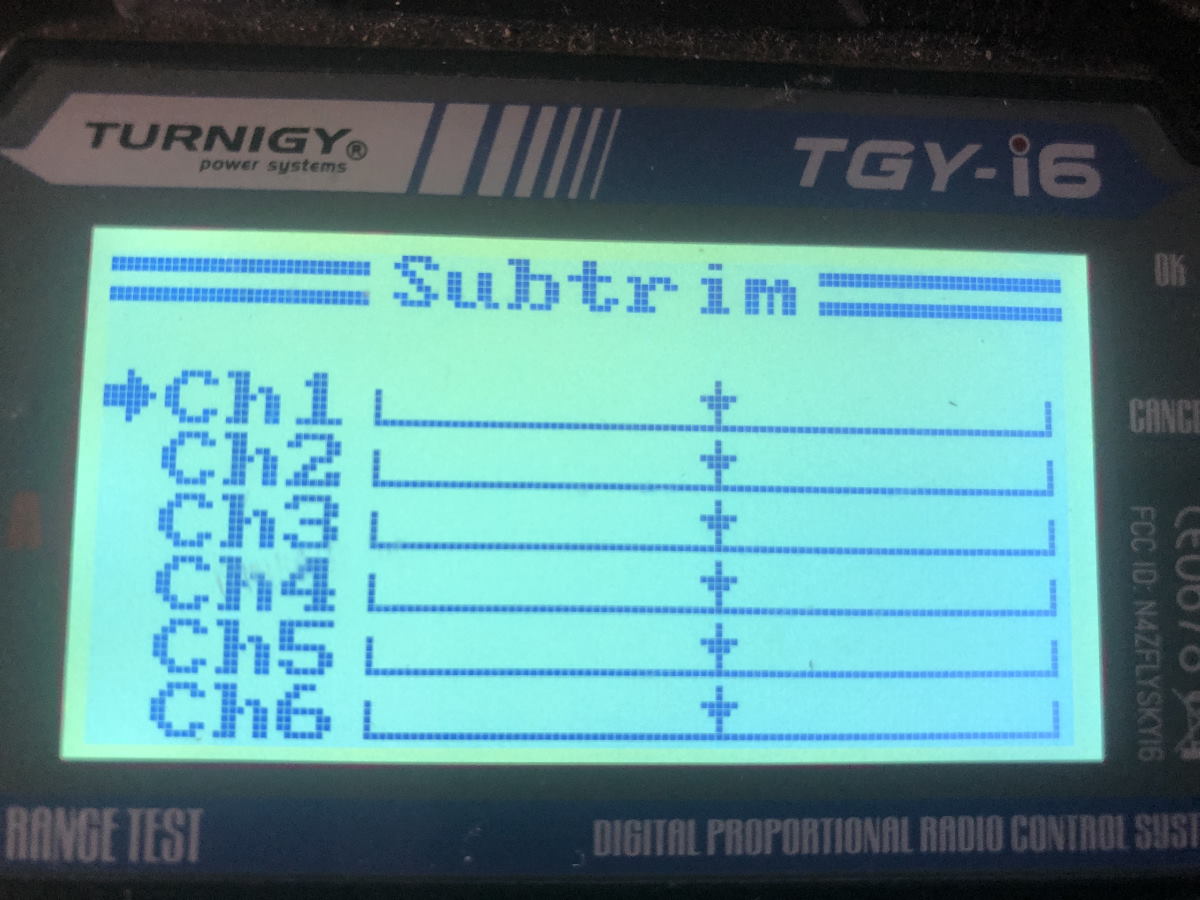 Also make sure endpoints are 100% / 100% for all channels and mixing is disabled. 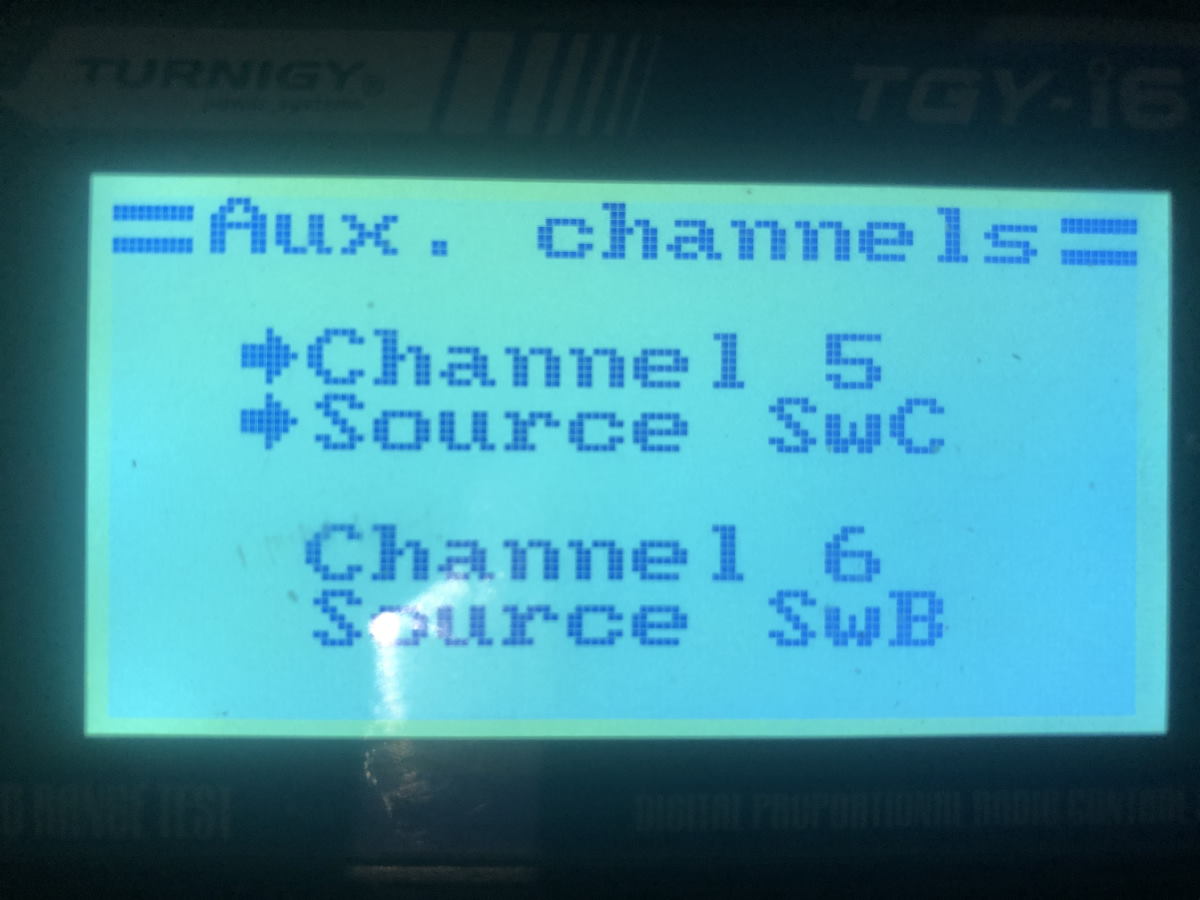 This will allow me to change flight mode.  Note the actual switch assignment can be changed in software.

Use FlightTools v2.3 to inspect and calibrate the transmitter.  Make sure the correct stick operates Throttle, Yaw, Pitch and Roll.  Make sure the sticks properly and show full range of motion. 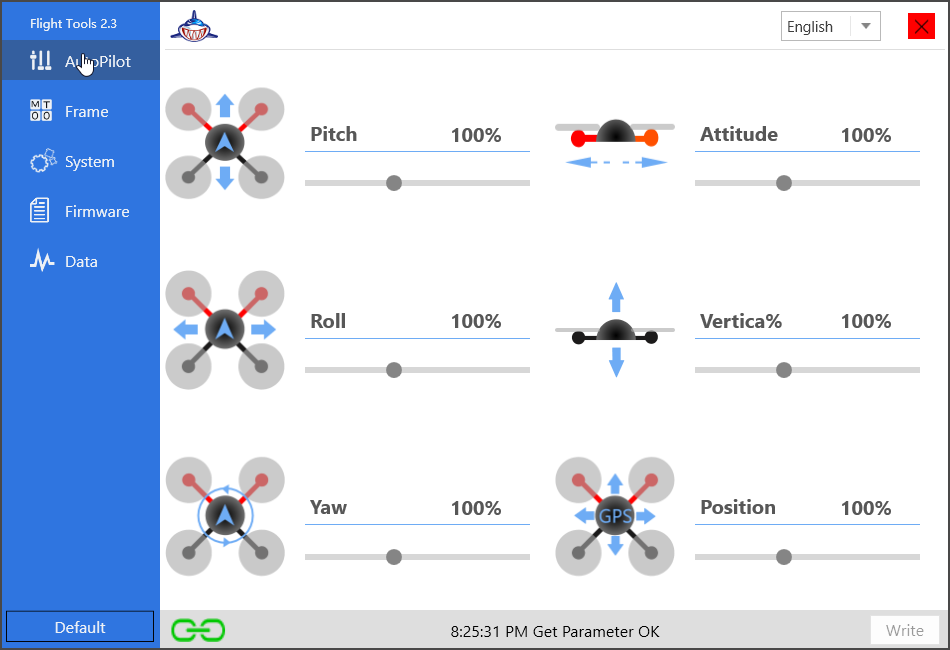 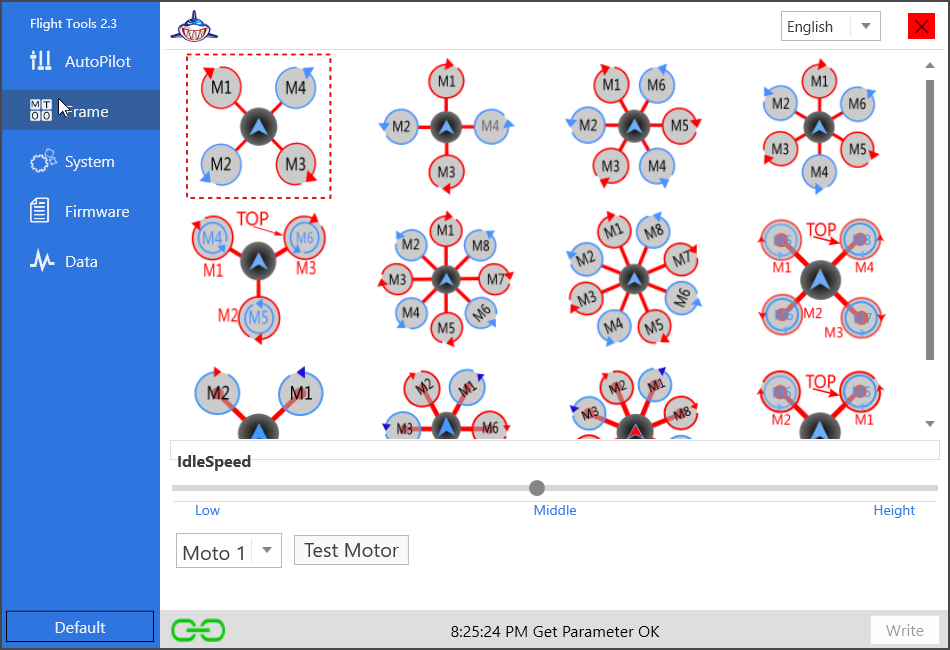 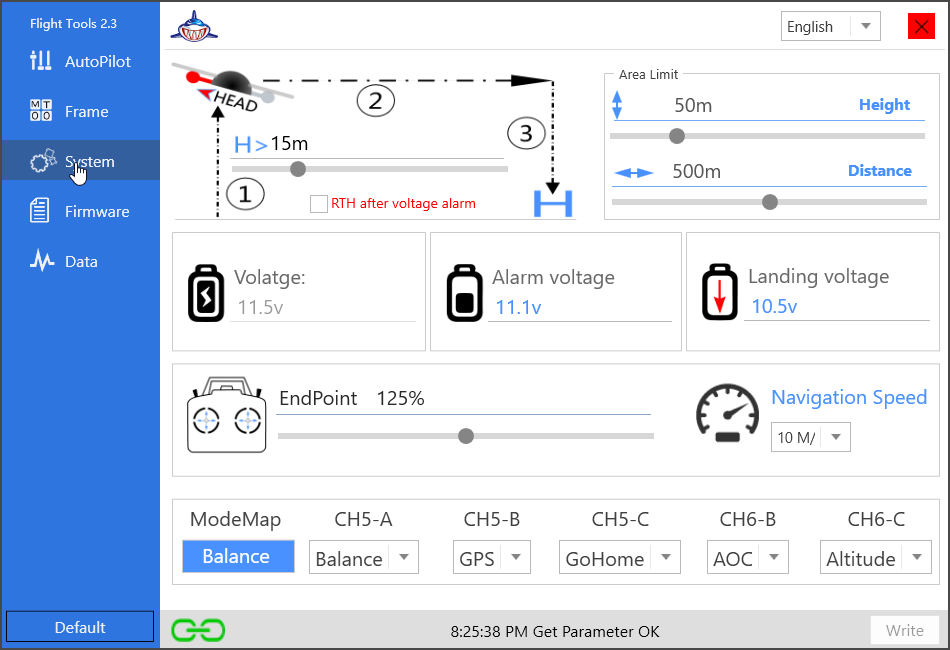 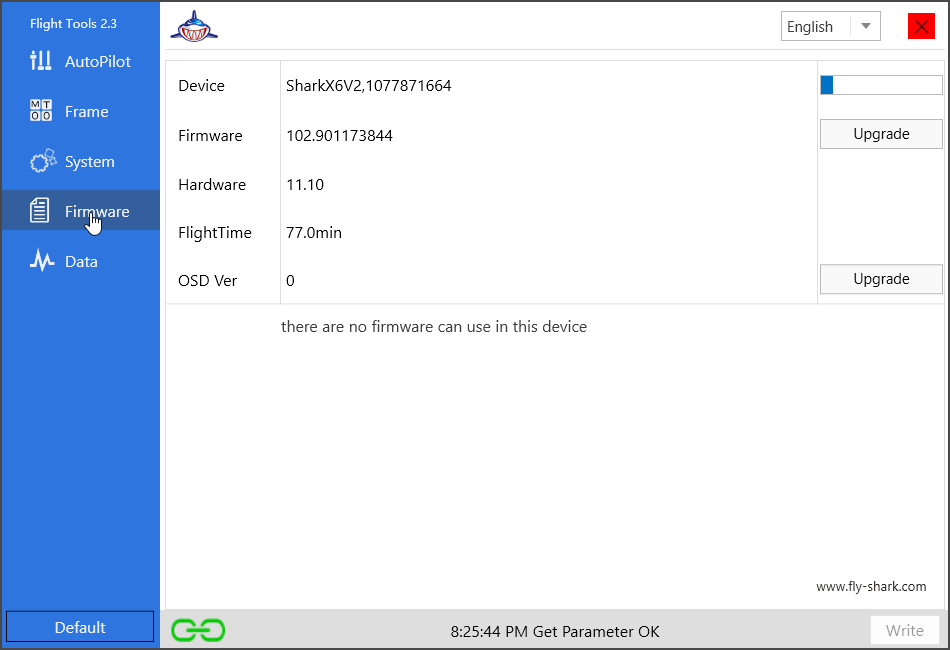 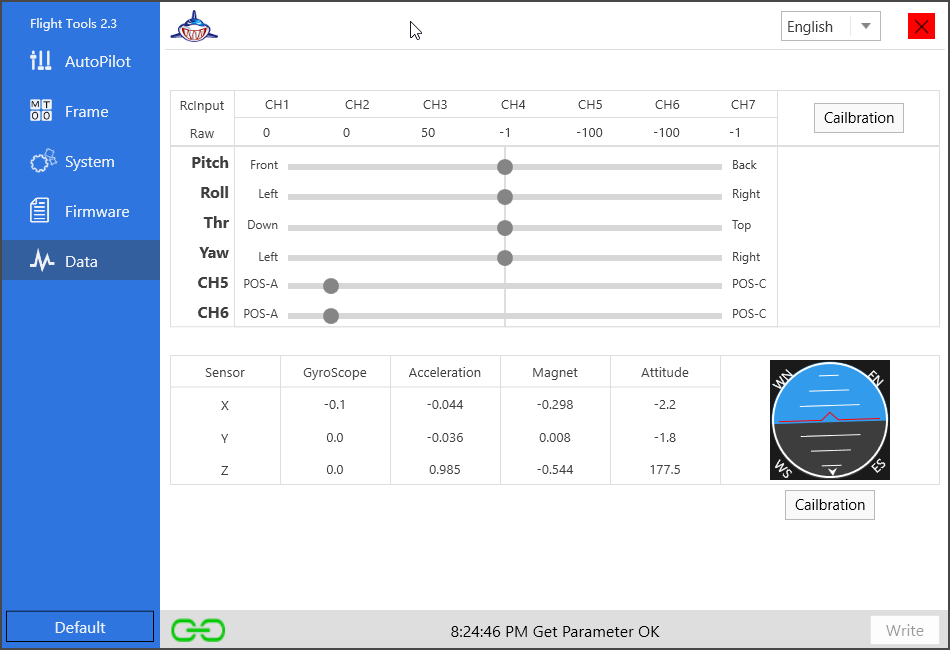 Low throttle and drone seems to want to tip over.  It was suggested to give it more throttle so the flight controller has something it can work with to auto-level.

The manual mentions the following steps which I am unable to perform: 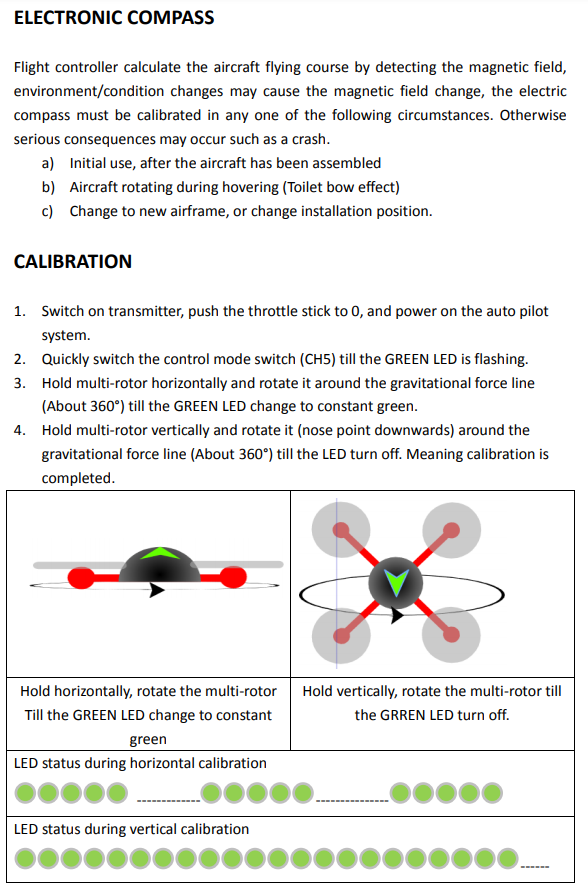 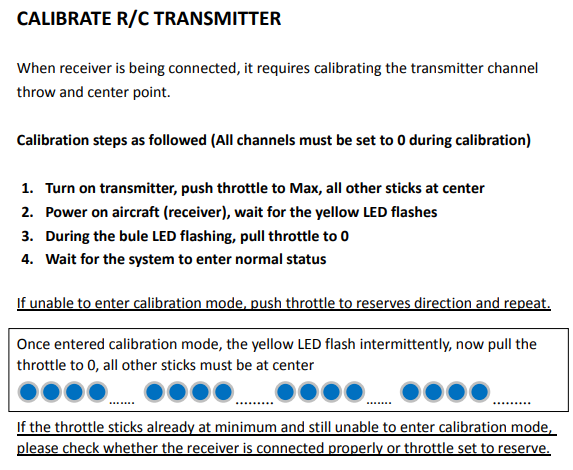 I am certain these steps are the exact same as the Calibration steps in Flight Tools v23.  I am confident the transmitter throw and center points are calibrated.  The ‘Write’ button remains greyed out, suggesting calibration results are stored immediately.  When I attempt to calibrate the compass in Flight Tools v23 nothing much happens.  If I disconnect the USB cable however there is a rapid blinking green light as per the manual.  The rapid blinking green light does not change as I perform the 360 degrees rotation in horizontal and vertical plane however.

It appears the Shark X6 flight controller is mounted upside down (left-right) in the drone frame, as the top down view in the picture below is different from the actual installation.  For example, the LED pin sits over motor M2 in my installation. 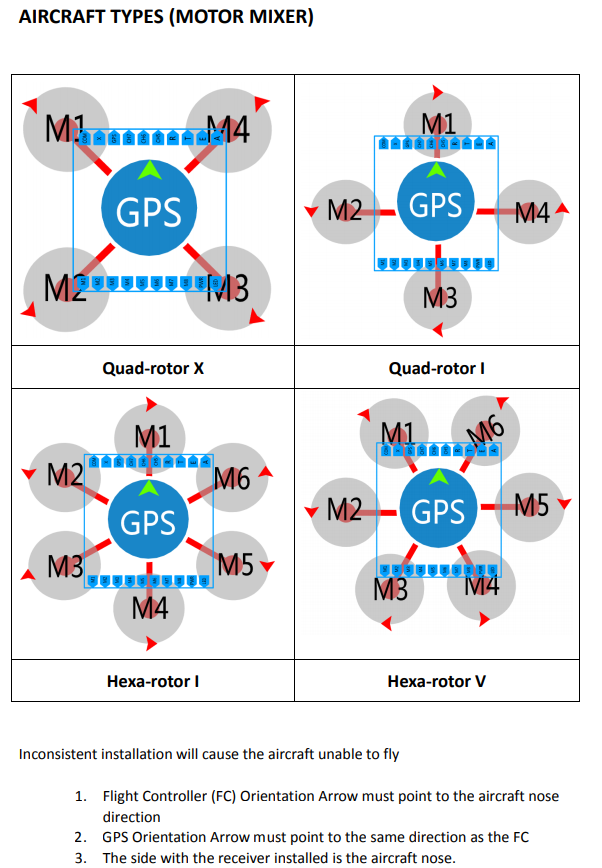 I had to invert channel 2.  LiPo battery was end of life.  All is well.

Use a charger with a discharge option to discharge a LiPo battery, or a 12V car halogen bulb (H7).  Measure voltage is 0 volt, cut off connector one wire at a time(!) and solder wires together. 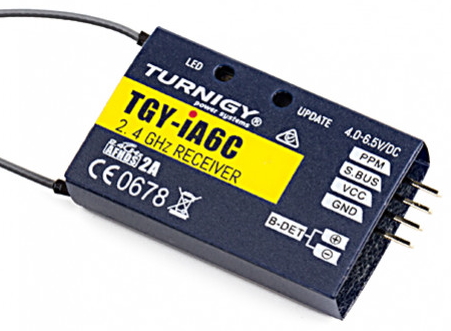 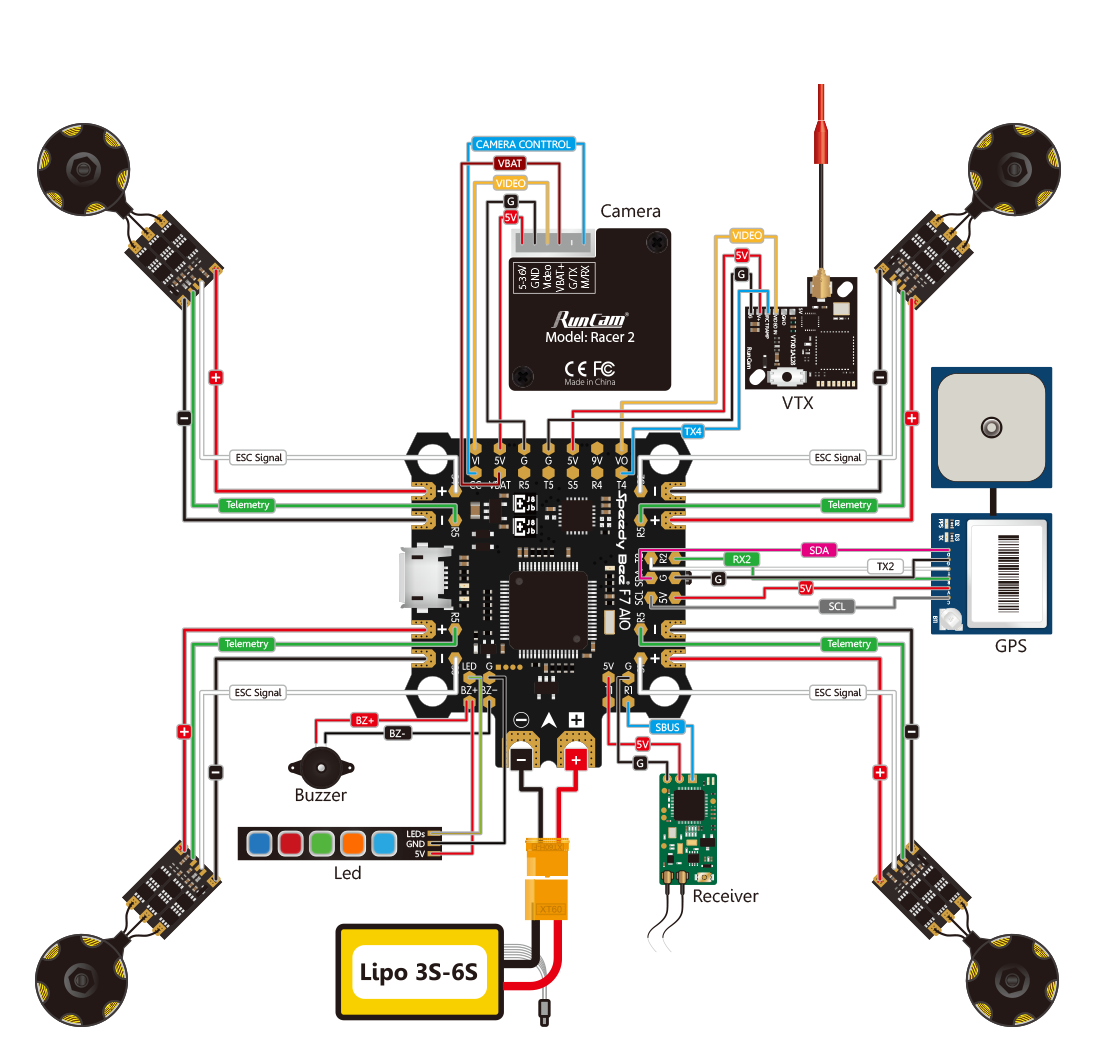 The flight controller uses RX/TX/GND to connect an external GPS and I2C protocol (SCL / SDA  / GND) to connect a earth magnetic field compass.  A combined GPS / compass modules Beitian-180 or Matek M8Q-5883 are popular and suitable candidates.  This may be added later for waypoint navigation.

If you have to grind your welds to look pretty then you are a grinder not a welder.